The Decline of the First-Time Home Buyer

The National Association of Realtors (NAR) recently reported that the percentage of first-time homebuyers is at its lowest levels since 1988, which represents only 30% of total buyers.

From its survey, NAR indicates that stagnant median wages for first timers is to blame, as well as more stringent credit guidelines and higher prices of rents, which prohibit saving for a down payment and closing costs.

As a Realtor in Southern California specializing in first-time home buyers, this trend has become increasingly evident during the past couple of years as housing prices are nearing pre-recession levels.  As first-time homebuyers are being squeezed, and current homeowners satisfied to sit on their equity, this is a problem that is not likely to go away, says The Washington Post.

Below is a list of why homeownership is so low amongst first-time homebuyers, followed by possible cures, and likely outcomes (a not so good one for first-time buyers).

Rents in Southern California have skyrocketed over the past 5 years.  In one Orange County market this past summer, the rent for a 615 sf, 1 bedroom unit was going for $1489 in April, but by August, that same unit was going for $1665.  That change exaggerates average increase in rents over the past 5 years (see chart below), but according to the LA Times, rents are expected to increase through 2018 another 8.6% to an $1819 per month average due to a lack of supply. 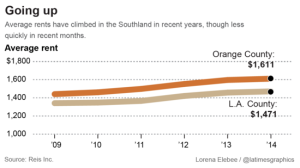 That’s bad news for first-time home buyers, who are already spending a significant portion of their income on rent – and with increasing rents, that gets compounded due to falling incomes. 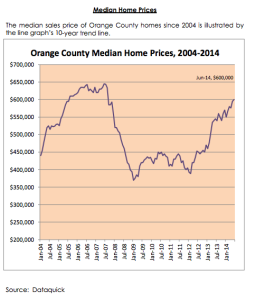 According to the California Association of realtors, it now takes an income of $93,596 to purchase a median-priced home in Orange County.  With low-interest rates, homeowners capitalizing on equity, and investors taking advantage of low prices and high rents, CA housing has had a big comeback in terms of housing values.  Foreclosure rates have tapered, and housing remains strong and more in line with long-term historical averages.  However, there exists a gap in social divide amongst those who are living the American Home Buying Dream, and those who can only aspire to do so.

Looking at the graph above, the best time for first-time homebuyers to buy a home in Southern California was between 2009-2012, but that is also when the millennials were struck the hardest with unemployment, and being forced with decisions to move back home and go back to school for further education.

The millennials that could afford to buy during that time period were rewarded with sizable home appreciation that they could use to refinance out of high mortgage insurance FHA loans to historically low-interest conventional loans.  Or, they take that equity and purchase a larger home with a sizable down payment and a low-interest loan. However, the trend during that time was for millennials to be outbid by investors paying cash.  If they had waited to buy, it would be even harder for them to do so with higher home prices, MI, and interest rates in 2014.

With inventories down and the population now growing at its fastest pace since 2003-2004 in California, there hasn’t been enough housing in the state to meet demand, causing increases in residential resale and rental markets.

During the boom of the real estate market in January 2007, housing prices appreciated so high because of financing.  A homeowner could purchase more home because of affordable interest-only loans, and low-investment no money down programs.  Yes, these loans were part of the demise of the economy in 2008, but that also had something to do with the fact that these loans were also stated income, or no doc loan programs as well.

When the economy recovered, loan programs rightfully reverted back to full doc underwriting guidelines, and FHA once again became the main staple for the first-time buyer.  But, as FHA grew popular, mortgage insurance premiums are making the program nearly obsolete.

About the only other entry-level loan available for the first-time homebuyer would be a 5% down conventional loan, and this is a viable route for those that can afford the extra 1.5% towards their down payment.  That extra 1.5% equates to another $4500, but if the client can afford it, that more than offsets the 1.75% MI Premium they’re likely to add back into their loan anyway.  In the same example in the previous paragraph, the buyer has no more costly MI.  They’ll have a higher interest rate, but the payment goes down to $1895 a month.  More importantly, MI is not tax-deductible and mortgage insurance is. So in this case, a higher interest rate to waive MI is a no-brainer.

With 90% of loans backed by the government today, the creativity of low-down payment loans have evaporated, leaving first-time homebuyers with little options for financing.

Student borrowing has become increasingly prevalent over the past decade.  As jobs have become tougher to land for millennials, college degrees have become their prerequisite.  But, increasing costs of higher education and enrollment fees have caused the national student loan debt to surpass $1 trillion and an increase of nearly 70% of total borrowers between 2004 and 2012. 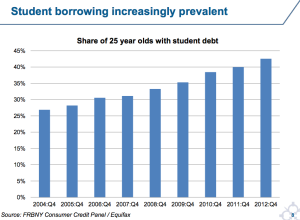 The current economic landscape for the first-time buyer is pretty dismal, so what can be done besides waiting for market corrections? The first-time homebuyer is an important part of economy, real estate and its recovery has been solid without them. However, just waiting for a better economy won’t be a fix.  Interest rates will eventually rise and the first-time buyer will be further expelled from the market even if those increased rates cause prices to drop.  Here are some ideas.

In 2008, the government jumpstarted the economy by offering tax incentives to first-time homebuyers.  Between 2008 and 2010, buyers in California were the beneficiaries of a state program as well.  With the government more concerned with abolishing important tax benefits of homeowners, offering similar programs that were offered in the past is out of the question.

The government can however try to incentivize homeownership to millennials by getting a little more creative.  With a looming student loan crisis, the government could offer an interest rate deduction to student loan debtors from 6% interest on those loans to 3% or 4%, if they were to purchase a home.  Or, modeling after forgiveness programs for teachers or other public service professionals, the government could offer a reduction of student loan debt if homeowners stayed lived in their first-purchased home for x amount of years.  Tax revenue lost would be earned back through the tax revenues generated by housing expenditures.

Lawrence Yun, chief economist for NAR, said in an article for the Washington Post that,”[G]ift funds from outside groups or from builders who have an incentive is wrong, but gifts from family members who want to invest their savings in a home for their children should be treated as if it is the same as the buyer’s money.” With the parents of millennials benefitting from increased equity positions in their homes, this is a viable solution.

In 2009, HUD was severely below its required 2% reserve threshold of their mutual mortgage insurance fund (MMI).  In response, for the first-time ever in its 79-year history, HUD footed the bill to taxpayers by raising the rate on its mortgage insurance premiums and undercutting lower-income borrowers.  HUD raised billions, so it decided to increase those rates again in 2012 when the fund was $16.3 billion below its reserve requirements.  In its 2013 annual report HUD stated that its MMI fund was just $1.3 billion in the red, but that came at the expense of 125,000-375,000 renters that were priced out of real estate market by the increases, according to NAR. Still, with MMI deficits nearly repaid, HUD is beginning to lower its mortgage insurance premiums.

This past October, HUD launched a program called Homeowners Armed With Knowledge, or HAWK, as a way for homeowners to lower their mortgage insurance premiums.  As an incentive to taking a home counseling and financial education courses, homebuyers can earn a 0.50 reduction in their upfront MIP (from 1.75%), a 0.10 reduction in their monthly MI (from 1.35%), and an additional 0.15 point reduction in monthly MI after 18 months if they avoid a 90-day delinquency.  Though more should be done in lowering MI premiums, especially with better underwriting standards today, this is at least a start.

With just one in three families in California able to purchase a median priced home in the state, builders are reluctant to build and increase the housing supply.  Investors have changed their game from flipping homes, to buying and holding (renting) because of low supply.  And, with inventory low, sellers are realizing pricing may have reached a tipping point, especially since inflation adjusted wages are at a negative growth rate since the start of the 2007 recession. Ultimately, this is best time for first-time buyers to save their money, pay off their student loan debt, and plan for future homeownership through career advancement.  The days of first-time homebuyer are gone, and without government intervention, its likely to stay that way.

“The best solution is a growing economy. There’s only so much any program can do to encourage first-time buyers until the labor market improves and wages go up.”
-Nela Richardson, chief economist at Redfin, via The Washington Post

Michael has been practicing real estate since 2005 shortly after earning degrees in Marketing and Finance at Cal State University, Fullerton. Transitioning from residential mortgages to real estate sales in 2007, he began working with numerous first time home buyers that had appreciated his thorough understanding of the real estate transaction, especially his knowledge of the loan process. Michael earned his Broker's license in 2011 and has been successful in the sales of entry-level condos to robust luxury homes. In building his Real Estate team, He stresses to his agents the importance of customer satisfaction, with a heavy emphasis in prompt response times to all questions and inquiries you may have. For a comprehensive discussion in buying or selling, please feel free to contact Michael.

Italia Realty specializes in the Southern California residential real estate market. Please contact us for an in-depth analysis of your home buying or home selling needs. We take pride in assisting you, and treat your new or old home as if it is our own. To see what we're up to, Follow Us!
Property Search sitemap